What is Formula Junior

Formula Junior originated in Italy in the mid 1950’s. FIA adopted Formula Junior as an International formula in October 1958. Initially the Italian cars, and in particular the Stanguellini-Fiats dominated but by the end of 1959 there were other manufacturers from around the world.

Formula Junior spawned many of the specialist industries in racing car development, such as Cosworth and Hewland. The first Brabham and Lola single seaters were designed and built to compete in Formula Junior. 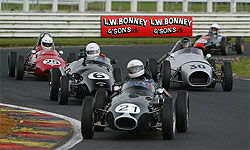 Formula Junior was, at the time, the only doorway to Formula One for aspiring drivers. Some included Jim Clark, John Surtees, Jack Brabham, Frank Gardiner, Pedro and Ricardo Rodriguez, Lorenzo Bandini, Teddy Pillette and New Zealand’s own Denis Hulme.

While a number of Formula Juniors came to New Zealand shores in period and some five or six cars were constructed in New Zealand almost all were re-engined with 1340 and 1500c engines to comply with the NZ National formula regulations of the time and in period there was possible only one FJ race in NZ.

Formula Junior, even with its short international life span made a massive impact on the motor racing world and revolutionised car design and Formula One drastically? During the six years of its existence, racing car design evolved from the traditional front engines and wire wheels with ladder style chassis, thru space frame chassis to the more sophisticated monocoque chassis, with rear engine and magnesium wheels of the current design.

What ever the design, all provided a level of satisfaction, competitiveness, variation in car design and fun that is hard to match. 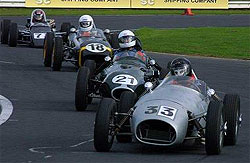 For a number of years Formula junior cars competed in NZ Historic events as part of the general Historic field. The few Formula Junior competing at this time typically still ran to the National Formula regulations but slowly one or two of the earlier front engined cars began appearing on the racing scene with their original capacity BMC or Fiat engines. The numbers slowly grew with further imports and restorations and the increased numbers along with good competitive racing saw the cars running with the bigger motor’s begin to convert back to comply to their original formula specifications.

The casual grouping centred around the Formula Junior sub sequentially formed into the NZFJR but still remains an informal group of competitors who have a passion for these cars.

The Register through its informality has no formal organisation, no chairman, secretary or member ship fee. Those with a FJ car automatically become part of the Register. The Register also recognise those cars adhering to international F3 prior to 1958 and from 1963 to 1968