As this was a one day only meeting we (Brian & Enid Service) decided to `amble’ out to Pukekohe on Saturday and stay the night with the other motor vanners trackside. Arrived late afternoon in time to set up while it was still light and then had drinks & nibbles with the Clarkes, Walkers & Bruce McCoy. Phil Foulkes had been out earlier in the day but sadly due to the coming together of a car & a wall they had departed before we even got to the track.

Sunday was a really nice day weather wise, warm (not hot), dry & no wind, perfect conditions for the last race of the season. With Brian Service & Bill Stone the only ones racing in their class it was guaranteed from the start that a BS was going to be the winner on the day. Alan Service was away overseas (apart from having his car in pieces) and all the rest were `no shows. Despite the small field the competition was `hot’ as Brian & Bill were around 30 points apart for the season. The race for the Chocolate Fish was on.

The turn out for the `one dayer’ was not huge so the days program gave the boys a practice and three 8 lap races. The racing between the two BS’s was very even and although Brian spent more time in the lead Bill was never out of touch and from time time the pressure showed. In race one Bill got a little keen and touched Brian while attempting to pass and for the second race meeting in a row sustained a broken nose cone.
Not only has Bill got a good supply of race tape he has it in RED. Brian just got red paint on his tire – lucky, lucky and he went on to win the race. Race two passed without incident with Brian again the first over the line. Third race was again good close racing but the pressure must have finally got to Brian. On the final lap he carried too much speed in to the SSSS’s, spun out & had a very near miss with the tyre wall. No damage but the car would not restart, Bill went on to take the flag and Brian managed to restart after the race was finished and head back in without being towed.

All in all it was a great day and as pre agreed the winner was to write up the report. Being rather spelling challenged I elected Enid to do the writing – oh the joy of delegation. 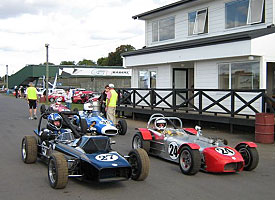